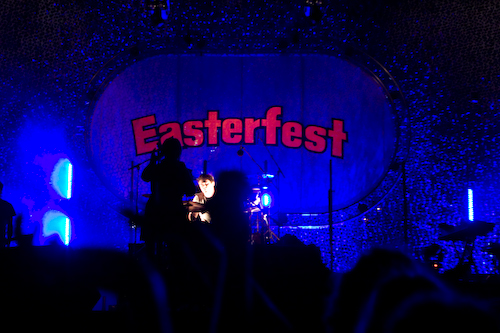 Easterfest - one of many events during Easter weekend.

The Easter Monday has its historical significance in the fact that it is observed as the day of resurrection of Jesus Christ. Jesus was crucified on a Friday which later on came to be known as Good Friday. He was buried in a tomb and when the tomb was searched on the Sunday, he was not there. It was believed that Jesus came back to life. Easter Monday is the day after when Jesus Christ is supposed to have returned back to Earth. It is believed that upon his return, Jesus stayed back for 40 days. He appeared to the believers and healed them and provided proof that he was indeed son of the God to the doubters. It is believed that he ascended for heaven after 40 days.

In the older times, the Easter celebrations lasted for a full eight days, which is also called as the Octave of Easter. This is still followed in calendars of some of the churches. Over time, the celebrations of Easter became shorter and was limited to the Monday following the Easter, which came to be known as the Easter Monday. The custom and tradition of Easter Monday was brought to Australia by the early English, Welsh, Irish and Scottish settlers.

Easter Monday is the last day of the long weekend in Australia and also the last day for many music festivals held across the nation. Some of the popular music festivals include the National Folk Festival, Bryon Bay East Coast Blues and Roots Bluesfest, the Australian Gospel Festival etc. People spend time with their friends and families, socializing and carrying out home maintenance. In harmony and remembrance of the rich Australian sporting culture and tradition, the Easter Monday is marked by many important sporting events being organized across Australia. Some of the important sporting events held on the day are Stawell Easter Gift athletics competition, the Easter Racing Carnival in Sydney, Brisbane to Gladstone yacht race, the Three Peaks Race etc. Horse races and football fixtures are also conducted on the Easter Monday.

Easter Monday is also the day for reflection and remembrance of the events which unfolded in the holy week and on Easter Sunday. Some of the orthodox Christian churches in Australia conduct Bright Monday rituals and liturgies which are held in the morning. The day is a holiday and most of the shops and establishments are closed. Those open also have shorter trading hours. It is an important day as it marks the ending of the long weekend and the holy week in Australia.