This federal holiday is celebrated every 4th of July each year. 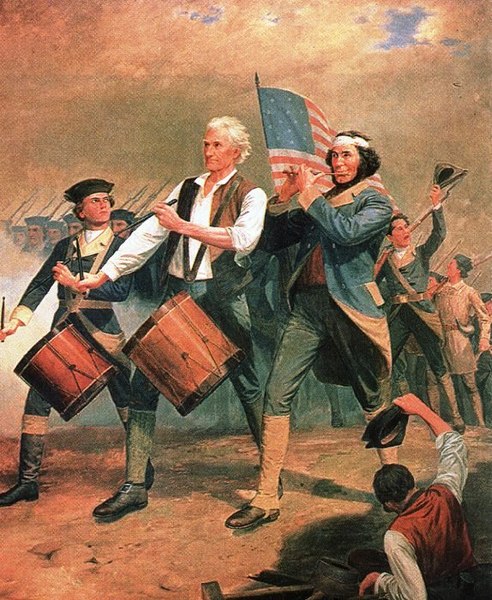 Spirit of '76, a familiar symbol of American patriotism.

The Fourth of July or July Fourth also popularly referred to as The Independence Day is a very important date in the calendar of the United States of America.

The significance of this Federal holiday dates back to July 4th 1776, which is about 241 years ago with the adoption of the Declaration of Independence by the Continental Congress formed by thirteen American colonies.

This led to the American Revolutionary War fought between 1775 and 1783 with France, the Dutch Republic and Spain joining in the war supporting the breakaway United States.

It is significant to note that the thirteen horizontal red stripes on the flag of the United States of America even today depicts those thirteen colonies who decided to take on the might of the British Empire to Declare Independence and break away from the tyrannical rule of the British who were bent on plundering the rich resources of North America.

It was quite easy for these thirteen colonies to band themselves together for many reasons, one they were all on the east coast of North America, they all had similar legal, political and constitutional systems and were dominated by Protestant English speakers.

The thirteen colonies were also equipped with a very streamlined and high degree of self government, very vibrant and active local elections, enabling them to resist any pressure directed by the British from across the Atlantic Ocean.

Today Independence Day is celebrated with much pomp and pageantry with a festive mood prevailing all across the United States of America, with firework displays, parades, carnivals, concerts, family re-unions and a plethora of activities which bring a sense of happiness and achievement among all the citizens of this great nation.

Independence Day is the National Day of the United States of America and is the special day to celebrate the history, culture, the type of government they have and also the high traditions that this country is endeavoring to uphold.

Initially there was confusion as to when the Declaration of Independence was signed, whether it was on July 2nd or on July 4th, anyway it was decided to have July 4th as Independence Day to put aside all the confusion.

It would be interesting to note that two signatories to the Declaration of Independence John Adams and Thomas Jefferson, who were subsequently elected Presidents of the United States of America died on Independence Day of 1826.

President James Monroe a founding father though not a signatory to the Declaration of Independence was elected as President and died on Independence Day 1831.